After a long delay and many requests from collectors, the second piece in my Viking Prow series is now in production and available for order.

This series was originally conceived as a tribute to the mystery and majesty of ancient Scandinavian culture during the Viking Era in general, and specifically to celebrate the 950th anniversary of the battles of Stamford Bridge and Hastings. These twin battles mark what many consider to be the end the Viking Era. However, since the Normans (or North Men) who ultimately conquered England by defeating Harold II’s Anglo-Saxon army at Hastings in 1066 were themselves the descendants of Vikings, it is also the completion of a great story arc.

Like the first in the series released in 2015 (Viking Prow: Coiled Serpent), this second piece in the series stands an impressive 17 inches tall (slightly taller than the first) and is also a bit beefier overall with bolder lines and details. This is meant to reflect the brute power of the drakkar (dragon). Weighing about 4 pounds, it is a solid piece meant to stand on desk, shelf or pedestal.

Each sculpture in this series is strictly limited to 95 signed and numbered castings along with a handful of artist proofs. They are cast, assembled and painted by hand, then clear-coated for a long life.

When this bold and brutish Viking Prow: Drakkar is placed beside the smoother lines and fine detail of the Serpent Prow, they are a wonderful pair. I am keen to make enough difference between each prow in this series that, were one to collect them all, they would have enough variety to represent a fleet of individually crafted ships.

An extremely limited number (10 to be exact) of these prows have been reserved as matched pairs, allowing you to have the corresponding edition number in both pieces. You can discover more about this opportunity here. 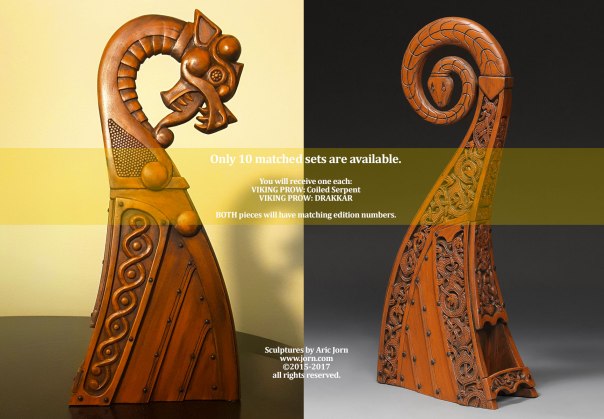 As always, I thank my patrons who allow me to continue doing what I love.